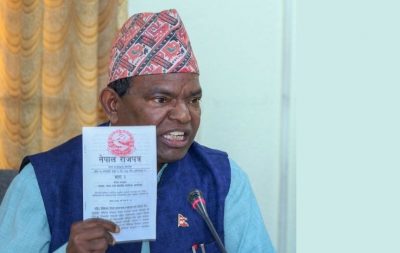 Kathmandu: Minister for Federal Affairs and General Administration, Lalbabu Pandit, has said appropriate laws should be made to curb the indiscipline and irregularities in the civil service.

So, suggestions are required in this line, he said at the meeting of the parliamentary committee on state affairs and good governance Friday.

The committee meeting was holding discussion on the bill designed on the formation and operation of the federal civil service act and the related terms and procedure.

The law was being made to make the civil servants more disciplined and responsible, so that they would not repeat mistakes, he reiterated. “Those given authority to take action against the erring employees were found not exercising the authority.

However, the law should be clear that none would be published in an unjust manner. The review on the punishment provision was essential,” the Minister stressed.

He warned of the law that even those who avoid action against the wrongdoer would be taken action. The impunity is further fomenting the irregularities, he argued, adding that the trend of acting against discipline would be highly discouraged. It is expected to result in reform in the administration, he viewed.

Earlier, the lawmakers said the employees should be promoted as per the evaluation of their performance and those delaying activities, resulting in injustice to the people should be brought to book.

The committee finally directed the Ministry to bring the bill by incorporating the agreement made in principle by the lawmakers.