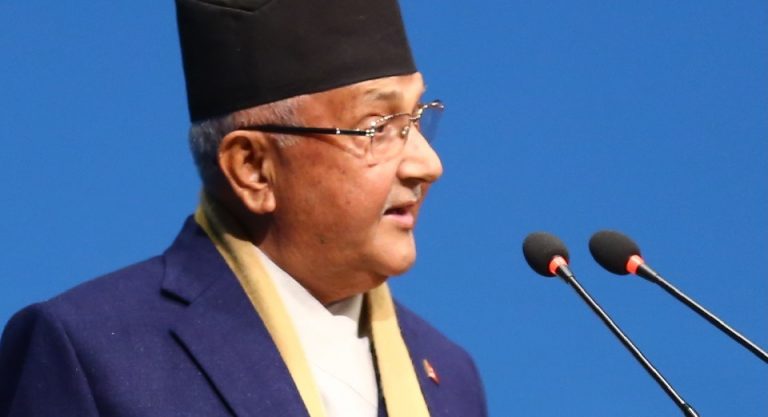 Kathmandu: Prime Minister KP Oli has said the government built a basis in its first year and was now moving forward towards the ‘year of achievement.

Informing the Parliament meeting Saturday about the progress of works the government carried out in its two years’ term, Oli said Nepal figured among the ten countries making rapid economic progress.

He said, “The country has been developing at a rapid pace. It is included among the 10 countries achieving rapid economic development. Its economic growth rate continues to the 6.5 per cent in three consecutive years. The total income is above 18 per cent.”

Stating that poverty has decreased by 1.5 per cent, he said the population of poor has dropped to 16.5 per cent. The economic development of the States was at the same level. “Social security programme has helped reduce the poverty. Overall, the economic development itself has increased. Employment has also increased as labour market has expanded,” the Prime Minister claimed, adding that people who have freshly come in the labour market need not be unemployed.

Although most of the people coming in the labour market have been employed, there are some complications due to lack of skills and efficiency, and of life skills based education.

According to him, the government, standing on a strong foundation, has taken this year as the year of rising short-term and long-term development and that 761 governments were carrying out their works to that end.

He stated that federalism with rapid development as per the aspiration of the people has been implemented in the country after the employees adjustment and there has been clarity in terms of works along with challenges coming from the new system. The fundamental rights are on implementation after the formulation of the related laws, Oli asserted.

Maintaining that the government was vigorously working to increase the access of every citizen to education and health, he said, “Last year, there was rumour that people cannot even weep let alone laugh if the communists formed the government. But the reality was not like that. It is not that authoritarianism is coming putting the democracy in peril, as had been alleged.”

As the PM said, the government was moving ahead as per the new system following the promulgation of the Constitution of Nepal and there was no situation of negation at present like that of three decades back. “The present administration is not like that,” he emphasized.

“Waging a movement for democracy and launching an agitation in a democracy are different things. We should be able to distinguish between a movement for democracy and an agitation in democracy,” Prime Minister Oli said, adding that the government has been moving ahead with the responsibility of fulfilling the onus of ‘Prosperous Nepal, Happy Nepali’ to materialise the national aspirations as the moment of political movement has now ended.